A perfect Venue For A Book Launch 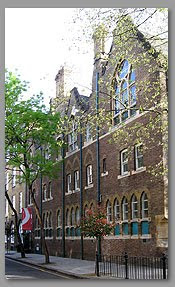 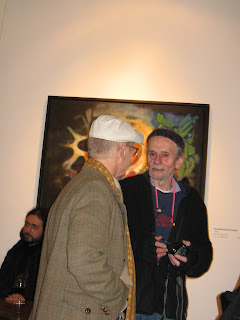 I failed to attend Greg's last talk at the Moot With No Name in February due to the ice age climate. Last night, I was tempted not to battle it out on the tube for the same reason. But I'm pleased I managed to haul my carcass in the pouring rain to Holborn's October Gallery (pictured) where Gregory had been booked in to appear.

His fascinating talk was a sell-out and its general theme, 'the Sun is a conscious, living organism residing in a thriving galactic community, thinking stellar thoughts that span the entire universe,' goaded the earnest audience to ask lots of probing scientific questions afterwards, including the old chestnut: 'do multiple universes exist?' (Gregory eloquently disputed this theory, humorous details of which are in his book). 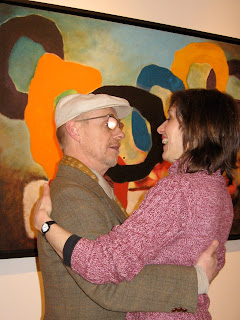 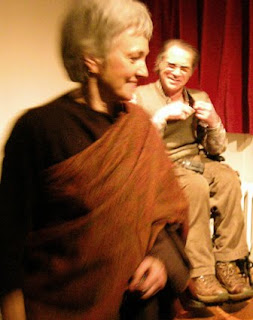 In the audience, I spotted Rupert Sheldrake, the famous biologist discoverer of 'morphic resonance, which leads to a vision of a living, developing universe with its own inherent memory', and dancer Stefani Crone (pictured with Jeff Dexter) who gave me a guided tour of the gallery.

Endangered species included the iconic photographer John 'Hoppy' Hopkins (pictured with Jeff Dexter's back), one of the founders of London's underground during the 60s. (His hippy credentials include founding International Times, setting up the London Free School and starting London's first psychedelic club, UFO). The bottom photographs including the one of Chili Hawes, the October's director plus Gregory were snapped by him.

Greg's successful talk inspired the rabble to buy Sun of gOd, which should be in the school curriculum. But, authors and publishers take note: what interested me was that the October art gallery, which was founded in 1978 and specialises in exhibiting art from diverse cultures from all over the globe is an ideal venue for a book launch, especially as it has a vast courtyard, perfect for esoterically minded smokers (Greg's book was launched there last year).
Posted by Frances Lynn at 9:52 AM

I used to write journalists to say VegeBurger must be capitalized in their articles since it was my trademark. Now I write to point out that “Sun” should be capitalized since it is the name of a specific star (as is Sirius). I used to be out on a limb with this but now NASA capitalize Sun and I regularly (though not consistently) see it capitalized in scientific journals.

And don't be confused by the weather. Sun always comes out for my parties - and the talks are indoors!

Good to see you there and thanks for coming.

I have corrected the Sun 'typo'. And Greg, keep me posted on further talks .... it's good to get my brain toasted.

Well, the Sun always shines around these beautiful friend above. I am a lucky old sOn from the centre of the universe, The Elephant & Castle.

I was pretty disappointed to to miss this event, but your excellent review has almost made up for it!

Darling, you are the 21st Century version of Ritz - congratulations!