Frantic Delay Due to Volcanic Ash 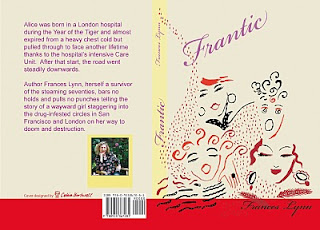 I've just received the long overdue proof copy of my novel Frantic, which has just been republished with a new cover by Celia Birtwell (front and back cover pictured).

The excuse for the book's long delay? According to its publisher Eiworth Publishing, it was held up due to the 'volcano ash cloud'.

Frantic, which will be OUT in about four weeks time is set in London and San Francisco during the early 70's.

It's technically a Young Adult novel. I.e. it's aimed at (21st century) late teens upwards, but adults who were young during the early 70s and have devoured it, have told me they appreciate it.

On a historical note: when The Who's Pete Townshend was moonlighting at Faber and Faber as a literary editor and read the first draft, he told me he recognised everybody in it! I took his editorial Comment on board and promptly disguised the characters.

I thought I had done this successfully until Jeff Dexter, who was THE disc jockey and Master of Ceremonies at clubs like the Roundhouse's Implosion during the late 60s and early 70s spotted himself in the book. Eeeek!
Posted by Frances Lynn at 2:41 AM No comments: 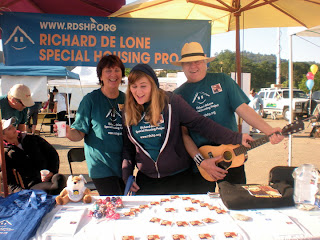 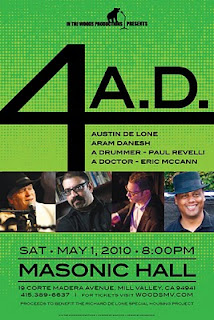 (A 'Government' Health warning: this blog entry should only interest people domiciled in Northern California who are interested in nepotistic promotion, rock music benefits, charity walks and Prader-Willi. If your eyes aren't glazing over, continue).

Talk about synchronisation: this afternoon my brother-in-law Austin de Lone, his wife Lesley and their daughter, my chanteuse niece Caroline will be running not in the London Marathon today but in Mill Valley, Marin County.

They will all be participating in the Prader-Willi California Foundation's 10th Annual Walking shindig at Cesar Chavez Park in the Berkeley Marina. The de Lones (pictured) will not only be power walking to help raise dough for the Richard de Lone Special Housing Project Team, but will also be contributing to the music which should inspire everyone to dance as well as run. (Also, Marin county residents: explore the Richard link on the 2010 Marin Human Race site for that event on May 8th).

If all that blatant plugging ain't enough, Austin de Lone will bring his new project, 4 A.D. (pictured) to the Masonic Hall in Mill Valley to kick off the In The Woods Productions benefit series on May 1st.


Austin used to host the Open Mic evening at the late Sweetwater in Mill Valley. It was an intimate venue for all the industry's musicians and I used to love gawping at my old teen idols jamming there. As a lot of the Sixties' dinosaur rock stars now live in Mill Valley, they will be grateful that they are going to have their regular musical meeting place once more.

The Grateful Dead's Bob Weir, a longtime Mill Valley resident recently performed in the Masonic hall with bandmate Phil Lesh while they were rehearsing for their Further debut tour. And Weir has even now come in with his technicians to help design a new sound system for the hall.

When the Sweetwater closed, the nightlife in downtown Mill Valley was dead as a dodo, but due to the resurrection of the Masonic, the music scene there is already resurrecting.
Posted by Frances Lynn at 5:55 AM No comments: 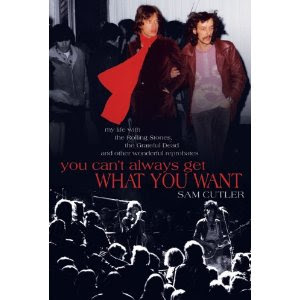 It's comforting to know that not all Sixties survivors are brain damaged wrecks. Sam Cutler, the former tour manager for the Stones and the Dead has successfully re-invented himself in the 21st century, his elephantine memory intact.

I hope this doesn't all sound like a press release: Sam's highly entertaining rock 'n' roll memoirs, You Can't Always Get What You Want has just made tech/publishing history: it's the first book to be simultaneously released with its multimedia iPhone app, which contains the 'full Cutler-narrated audiobook synchronized with the text, video links to two interviews, and more than 30 photos (some exclusive to the app).'

Sam featured in the Albert and David Maysles directed Gimme Shelter 'snuff' documentary, which unwittingly recorded the murder of a fan by a Hells Angel at the disastrous Altamont concert.

Tech buffs, take note: the iPhone app (the multimedia elements were developed by Expanded Books/Apps, and Ironic Apps, a firm run by former Rolling Stones business manager Ron Schneider) includes clips of the concert, which Cutler lucidly reminisced about in his book. (Incidentally, it was originally published in Australia through Random House and has now been republished by ECW Press, a Toronto based publisher for the American market).

Sam Cutler, a Brit who currently resides in Australia will be doing a mammoth book tour, commencing on April 13 in the States including Seattle, Portland, San Francisco, Los Angeles, Toronto, New York and will be in London in May. Flags will be raised, especially as he will take part in a Webcast that will be streamed live to iPhones on April 25. 'Get Yer Ya-Ya's Out!'
Posted by Frances Lynn at 2:30 AM No comments: