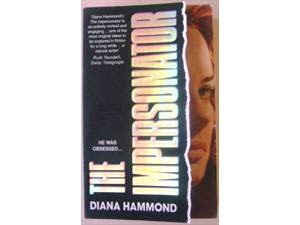 It's not every day one gets to have lunch with a novelist who has written one of your favourite novels. But, today I did. Diana Hammond lives in Paris, but came to London for a few hours, specifically to check out Waterstones in Piccadilly. She craved to browse/investigate new titles written in English.

I loved her novel, "The Impersonator" so much, I put it at the top of one of my Amazon Listomania lists. Diana is not just a novelist though. She's also a screenwriter and used to live in Hollywood, making a fortune from prolifically writing screenplays, irrespective if some of them didn't get made.

Over lunch, I confessed in the past I had showed my work-in-progress novels to people with horrific results. One well-meaning editor had even suggested a plot line for my new book which blocked me for months. Diana was horrified. She never shows her work to anyone until after she has finished it. We both agreed we belong to the breed of writer who doesn't like writing an Outline for their book before commencing writing. I find that when I do write a detailed synopsis of my unwritten book before I start, I feel I'm restricted by a straightjacket .... and tend to write to formula.
Posted by Frances Lynn at 12:11 AM 1 comment: Links to this post