Millennium Knocks me Out

Alan Jones, one of the founders and organisers of the annual FrightFest film festival (now held at the Empire cinema in Leicester Square) gave me an early Christmas present: a ticket for "Millennium", the film adaptation of Stieg Larsson's bestseller, "The Girl With The Dragon Tattoo".

This thrilling Swedish movie with sub-titles zipped by even though its running time was 150 minutes. I can safely state it was one of the best films I've seen in as long as I can remember, and now can't wait for the other two parts of the "Millennium" movie trilogy, based on Larsson's other books: "The Girl Who Played With Fire", and "The Girl Who Kicked the Hornet's Nest".

"Millenium" was such a powerful film, that after I emerged from the screening, I didn't know where the hell I was. When I finally realised I wasn't in Sweden but was holed up in the densely populated Leicester Square on a Saturday night, I cut through the Soho streets, still totally immersed in the movie.

I skidded and fell over in an alley packed out with drunken revellers, and was immediately helped to my feet by a gang of concerned bystanders, who informed me I had bashed my head on the pavement. Paranoid, I had done a 'Natasha Richardson,' I assured them I was all right and groggily made my way home.

I am still compos mentis, but still can't stop thinking about the movie, which goes on general release in the UK in April.
Posted by Frances Lynn at 6:43 AM No comments: Links to this post 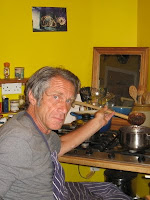 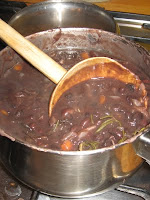 Gregory Sams'
new book Sun of gOd (his previous book is the iconoclastic Uncommon Sense) looks like it's becoming a best seller. It's selling like crazy, especially since Jonathan Cainer wrote about him and his book in his Daily Mail astrology column every day last week.

To celebrate, Greg kindly gave me a one to one macrobiotic cookery lesson at his house. First, he (patiently) taught me how to concoct perfectly cooked rice (to think I've been making it wrong all these years!) with garlic and onion, plus black turtle beans, and the pièce de résistance: black fungus (available from Chinatown supermarkets). Also on the menu were steamed vegetables, plus Magimixed swede with butter, a sprinkling of cheese and yoghurt. Yummmmm! I never realised how tasty macrobiotic fodder could be.

To think, when I attempted to become less yang after chewing macrobiotic food for the first time at the Sams brothers' (Greg and Craig) famous Seed restaurant all those decades ago, I chose to exist on a regime of brown rice (plus cigarettes). I was forced to stop when I was unable to walk up the road anymore! But thanks to Greg, I'm now a black bean convert, especially as the meal we cooked tonight would have cost in the region of £2.50 per head, ideal in these 'credit crunch' times.
Posted by Frances Lynn at 4:21 PM No comments: Links to this post

A Missing Treasure Is Discovered 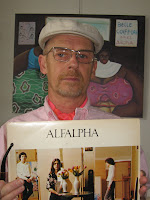 Unfortunately, when this harmonic country style rock album (recorded at the Workhouse studio alongside The Blockheads' "Do It Yourself" offering, engineered by the 'fabulous' Laurie Latham) was finished, it coincided with the onslaught of punk music.

According to the major record labels, the 'revolutionary' emergence of punk made talented authentic rock bands an obsolete dinasaur. As far as they were concerned, they were completely redundant. The Music Biz welcomed the fact that punk was made up of predominately working class musicians (a couple of exceptions that instantly spring to mind are The Pogues public school educated Shane MacGowan, and The Clash's Joe Strummer, who was famously a diplomat's son).

In the Mid '70's, Alfalpha was regarded as 'polite' rock, which explains why their second album was christened "Middle Class". And although this talented band who played country cross music with an edge; and provided the backing vocals on Marc Bolan's last album, they decided to disband after making their doomed second offering. Even though the band had a successful regular Thursday night slot at the Speakeasy Club, where the punters went wild on hearing the band's second album, the band still decided to break up.

When Jeff Dexter, the band's producer/manager informed me David Gilmour's studio manager had found the tapes, and he now had them, would I be interested in going to his house and listening to the aborted album? 'Is the Pope Catholic?' Of course I would.

Alfalpha's talented musicians on the first and second album comprised of 'boy genius' songwriter and musician Nick Laird-Clowes (six string accoustic guitar), Sam Harley (bass and accoustic guitar), his brother Andy Harley (accoustic guitar/lead vocals). They also discovered the writing skills of the then unknown Chris Rea (just down from Middlesborough ), who wrote the album's beautiful "Because of You" track.

At Jeff's house, I sat down and listened to "Middle Class" all the way through, and lurved this exquisitely produced happy album (stuffed with stirring harmonies), which although made in the mid Seventies has travelled and is totally relevant today. I hope Alfalpha's magnificent second album gets re-issued. It deserves to!
Posted by Frances Lynn at 3:52 AM No comments: Links to this post 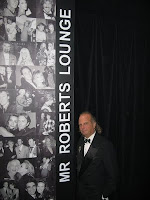 I created this blog in order to blatantly promote friends and family. So I can't resist plugging my old society photographer pal Robert Rosen, who during the early Eighties used to be a permanent fixture at London parties before triumphantly returning to his native Sydney.

At a recent 'glittering' shindig to celebrate '50 Years of Australian Vogue', a huge wall in the 'lounge area' was devoted entirely to Robert's photographs. But, don't Australians have any sense of grammar? Surely, it should be "Mr Robert's lounge" - not "Mr Roberts lounge?!"
Posted by Frances Lynn at 2:14 AM 1 comment: Links to this post