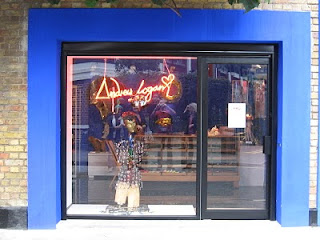 The iconoclastic jeweller and Sculptor Andrew Logan has recently opened his gorgeous new shop (above) inside his studio emporium (at The Glasshouse, Melior Place, London SE1 3QP), which now flogs his exotic and unique jewels to his rabid and appreciative fans. 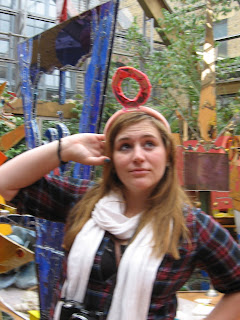 As I fancied a choker and a matching pair of glass earrings, I couldn't resist making my way to Andrew's 'surreal emporium for all', where I was amazed to see the Mill Valley based singer/songwriter Caroline de Lone trying on some of Andrew's unique jewelled headgear in his studio.

So what was the charismatic Caroline de Lone doing in London? Trying to find a dynamic new stage outfit for her next concert appearance of course!


She and her musician/producer father Austin de Lone  will be opening for Elvis Costello and Nick Lowe at her brother Richard de Lone's benefit concert at San Francisco's Great American Music Hall on October 1st (phew!).
Maybe I should order a bespoke, magic flying glass carpet from Andrew Logan to transport me over the pond in order to hear Caroline's hypnotic voice serenade her smitten Bay Area audience. 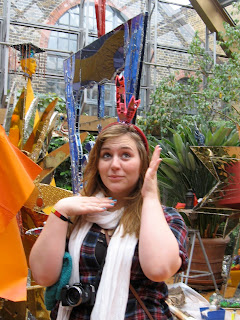 Posted by Frances Lynn at 1:49 PM No comments: 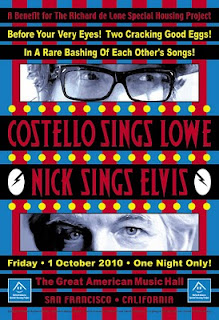 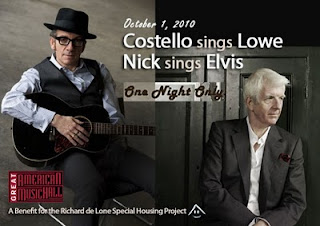 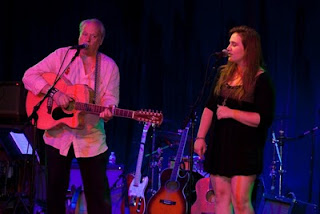 This year's benefit features Elvis Costello and Nick Lowe who will warble and play their musical instruments.

But what personally interests me is  the prospect of Austin  and his chanteuse daughter Caroline de Lone, who will be performing together as the opening act.

Aaaaaaah! It's so nice to see my relations (Austin is my brother-in-law and Caroline is my niece)  appear together on stage in aid of  my nephew Richard de Lone, who suffers from the Prader-Willi syndrome.
Posted by Frances Lynn at 3:36 AM No comments:

I've just done the best barter for as long as I can remember: I swapped my first novel Frantic for 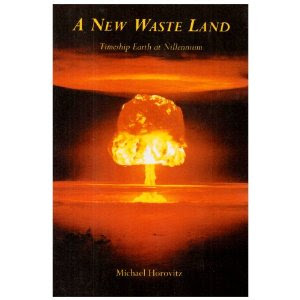 So how did my bargain of the century with the legendary poet miraculously take place?

I was lucky to be invited to his private view ingeniously titled a 'little festival of 45 years of Michael Horovitz's Picture-Poetry' at Art@42 (Pembridge Road, London W11 3HN).

The building's prime real estate belongs to the dentist to the stars: Dr Simon Godley, who moonlights as Horovitz's art curator as as well as being a writer and an actor. 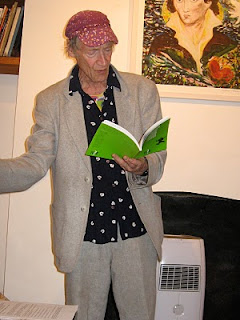 After Simon gave me a drink and freebie tubes of paste for sensitive teeth, I latched onto Michael Horovitz, who promptly showed me and my fellow early attendees round his unique exhibition, which consists of of his original picture-poetry Art.

The guests were an eclectic mix including  the French rock photographer Chantal Coves (she also organises the yearly V rock festival), and the Pirates of Penzance piratical looking actor Michael A. Sargent (he was discovered in Borough market and shortly starts work in the new movie version of Treasure Island. 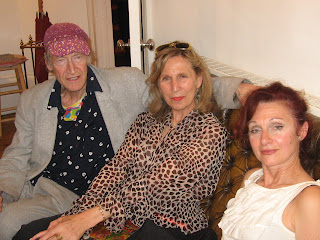 The highlight of the literary evening besides Michael Horovitz's 'must have' art was his riveting impromptu stand up poetry performance, which was so zany it motivated the appreciative hordes and besotted philanthropists at the private view to go berserk, elbowing each other out of the way to buy Michael's numerous books and art.

There's still some stuff left, so leave word for Michael Horovitz c/o 020 7229 7850 to arrange a view by appointment.
Posted by Frances Lynn at 5:46 AM No comments: