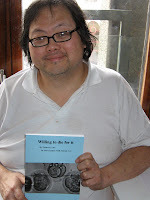 I was heartbroken to learn Dr Sammy Lee died over the weekend. To help commemorate his memory, I am re-posting a blog entry I wrote about him in 2010.

Last year, I was afflicted with RSI in my thumbs, mainly caused by knocking out a commissioned biography titled Willing to die for it in record time on Dr Sammy Lee (pictured), a charismatic scientist who was an early IVF pioneer and is currently interested in stem cell therapy and human cloning.

I previously didn't know anything about IVF, except for the horror stories barren girlfriends told me about the rigmarole of trying to have an IVF baby. Luckily for me, Sammy is such a fascinating raconteur, I could have listened to him all day reminiscing about his fascinating career, which was what I did while interviewing him for the book.

The book, published by, and directly available from Murray Print (whose last title was on the revolutionary Medical Officer of Health, Dr Raymond "Paddy" Donaldson), is also for sale on Amazon.co.uk and in book stores. The title is Willing To Die For It, due to the fact Sammy dedicated his life to IVF to such an extent, he neglected his health culminating in a debilitating heart attack.

I was enthralled by Lee's life story. He started at UCL before leaving the world of Academia for the then innovative world of IVF , but he is unlike any academically minded specimen I have ever met. He is a maverick scientist who after doing postdoctoral research period at UCL, joined the Humana Wellington Hospital as a clinical embryologist a few years after Steptoe and Edwards (who were responsible for the birth of the world's first IVF baby Louise Brown) offered IVF to the nation. The NHS didn't want it then, but thanks to Lee's crusading efforts, the NHS eventually did.

Lee also helped pioneer GIFT (Gamete Intra-fallopian Transfer) in the UK and soon afterwards became the research director of a number of IVF units in the country. His IVF work helped the UK Industry grow from about 5000 cycles a year in 1986 to 37,000 a year in the early Noughties, now touching 50,000 a year, and he helped establish many of the eighty clinics now in existence. Lee contributed to the existence of many of the IVF babies in the United Kingdom' (a lot of them born to grateful famous parents) and was even turned into a character in the best selling debut novel of one of his grateful patients.

Yes, thanks to Sammy, I am educated about the world of IVF and what is comforting to know is that if I do want a baby at the age of seventy, I shall know who to consult. And who knows? By then human cloning might have been made legal.
Posted by Frances Lynn at 2:40 AM