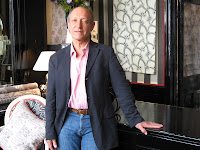 I used to religiously go twice a week to Andreas Reyneke's Body Conditioning Studio in Notting Hill Gate in the Seventies. Dreas is the body conditioning teacher to the stars, and Bianca Jagger, who wore plastic thigh warmers, Rupert Everett, Rod and Alana Stewart were in my regular slot. My body had never looked so good, and no wonder as Dreas, an ex-Ballet Rambert dancer has taught Pilates for over three decades and is reputed to be one of the best in the world.

The last time I saw Dreas was over twenty years ago, when I told him I was leaving him for golf (I sobbed with emotion while doing an arabesque on one of his machines). So I was intrigued when Celia Birtwell, also an ex-pupil and incidentally the best textile designer on the globe ordered me to meet up in her shop, as she was treating Dreas and myself to a big reunion lunch.

I was relieved to see Dreas looked exactly the same and was also relieved when he said I hadn't changed a bit either. I gave him the third degree, interrogating him on what form of exercise I should do now, as I'm bored stiff with doing the gym. Dreas suggested I get his book Ultimate Pilates, and also his DVDs - available from the Dance Books site.

He recommended I should first look at the Dynamic 5th: Pilates + Preparation for Ballet Students with Dreas Reyneke and students from the Royal Ballet School DVD, which gives the dancer co-ordination, core control and stability from the feet in application and action; and demonstrated by dancers from the Royal Ballet School. As this DVD contains a 'wonderful' series of arm exercises that work the upper back and posture, and also the back of the arms, it is suitable for everyone.

The Advanced Pilates DVD features three dancers from the Royal Ballet: Tamara Rojo, Johannes Stepanek, and Edward Watson (who is the Royal Ballet's most pliable principle dancer), plus the English National Ballet's Désirée Ballantyne. It would be worth getting the DVD for them alone.

I shall give it all a a whirl. Mind you, once Dreas sent me to a beginner's ballet class which was so rigorous, it left me unable to move for a week afterwards!
Posted by Frances Lynn at 4:12 AM No comments:

For All You Crippled Writers Out There 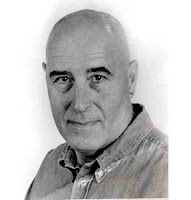 I've been doing so much extra key-tapping since joining Facebook, I started to get excruciating pains in my thumbs as soon as I glued myself to my computer. Luckily, a truly fantastic healer called Sat Raimondo (his contact details are on his site) came to the rescue. I tubed it to his flat in Clerkenwell where he gave me an invigorating Indian Head massage, concentrating on my hands and arms, giving me a dollop of spiritual healing for good measure. I came out floating and have been able to write ever since without stopping for breaks. It's comforting to know Raimondo is on permanent standby if/when I get into trouble again.
Posted by Frances Lynn at 2:47 AM No comments: 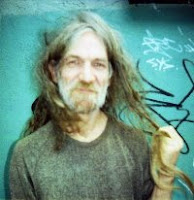 Since I joined Facebook (three lost days ago), I confess I haven't written one word of my new novel but to compensate, I have made my first cyberspace Friend on the lethally addictive site (it's incredible to see how many friends and acquaintances in my ancient address books are still alive).

My new pal is a talented New York based Videographer called Joly MacFie (his work can be viewed on Punkcast), who makes visually unique videos of all the bands as a 'hobby', and then sells them his edited and captioned tapes, all of which look like mini-movies.

In the 'Old Days', Joly was the roadie for the defunct Pink Fairies band, graduating to becoming the creator of Better Badges before emigrating to New York and making a name for himself with his ingeniously directed video work.

At one point, while I was chatting to Joly on Facebook - he was telling me what he thought of my first novel Frantic - I was simultaneously involved in a literary conversation with the 'legendary' Sam Cutler (infamous for hiring the Hells Angels to guard the stage at the Rolling Stones' Altamont concert), discussing his book, You Can't Always Get What You Want: My Life with the Rolling Stones, the Grateful Dead and Other Wonderful Reprobates", and ex-"Deviant" , the prolific science fiction writer Mick Farren. Mick recommended I get his book, Jim Morrison's Adventures In The After Life after I asked him which book of his I should read first.

The outcome of our conflab is we are all going to send each other our respective books. Never in my wildest dreams, did I imagine I would join an On Line literary club with a gang of old reprobrates!
Posted by Frances Lynn at 3:52 AM No comments: 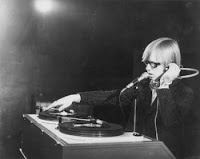 Oh dear! What have I done?! It was the illustrious Jeff Dexter, who led me into temptation. I've finally succumbed and have just joined the dreaded Facebook site, which I've been resisting for 'years'. I suspect it's not a good idea, as I'm already finding it toooo addictive. Not exactly conducive to writing! It's bad enough I'm hooked on Madame Arati's hypnotic site, but at least I'm not bonkers enough to join Twitter!
Posted by Frances Lynn at 1:05 AM No comments: 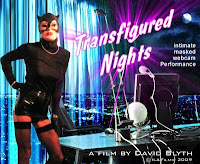 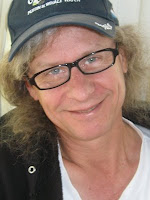 David Blyth, the New Zealand based international film director has been invited to this year's Fantaspoa film festival in Brazil (held in the most southern and European city Porto Alegre on the Atlantic coast), as not one but FOUR of his movies ('Angel Mine', 'Death Warmed Up', 'Bound For Pleasure' and 'Transfigured Nights' ) will be screened there. .

He has also been asked to conduct workshops at the festival with the Argentinean director Fernando Mantelli. But, David won't just be presiding over his past films at the festival, as he will also be talking about his new script outline called Wound, an original supernatural horror film. 'A supernatural daughter returns to haunt her birth mother exposing the monstrous family secrets,' is how David describes his new project (its shoot date will tentatively be early December depending on financing).

So, I was thrilled when I received a couple of freebie DVDs from him sent by FedEx, especially as they were two of his earlier films, namely: Death Warmed Up, and Angel Mine - the latter was so controversial upon its release, that Questions were asked about it in Parliament. (Read all about it on the The Listener article).

Death Warmed Up is notorious for being New Zealand's first horror film which was made before Peter Jackson's splatter comedy horror flicks. In fact, I met David a few years prior to Death Warmed Up's screening at the London Film Festival in 1984, during which members of the audience were vomiting in the aisles because back then, this unique comedy horror film was seen as visually shocking.

Both DVDs are available from David's site (click on David Blyth), as well as the rest of his movies, including Bound For Pleasure, and his latest release - Transfigured Nights, (which will also be screened during the eleven week "Sunday Night Out" festival on Triangle and Stratos Television in New Zealand from 26th July through to 4th October ).

But first, when David returns from Brazil, he will be editing his "French Connection" documentary (funded by the French NZ Friendship Fund) which concerns the 90th anniversary of the Liberation of Le Quesnoy in Northern France, in which his Grandfather played an important role. This illustrates that David is not a one movie genre director. So, it's all GO for David, but why does everything seem to always happen at once?
Posted by Frances Lynn at 12:01 AM 3 comments:

There's Nothing Wrong With Nepotism

I started this blog in order to blatantly plug members of my family, so here goes: I'm heartbroken I shan't be able to make my illustrious brother-in-law - Austin de Lone's gigs in Italy this month. (Austin recently sat in and played accordion with Elvis Costello and an abbreviated version of his Sugarcanes at his in-store appearance at Amoeba Records in San Francisco. The Sugarcanes are a batch of Nashville A-list musicians that recorded Elvis's new album and are currently touring with him, which proves that Elvis always makes sure he surrounds himself with the best musicians).

Also, Austin de Lone's Soul Blues Review will be the house band at the Poretta Soul Festival, at Rufus Thomas Park in Porretta Termé July (24, 25 & 26). They will be backing up Spencer Wiggins, Percy Wiggins, Oscar Toney Jr, Toni Green,, J. Blackfoot, Jesse Dee, and Bobby Johnson, as well as performing on their own and giving music seminars during the week they are in Porretta

Unfortunately for Italy, Austin's favourite singer/my niece Caroline de Lone will not be appearing with the band this summer, as she is at home in Mill Valley busy writing new songs for her first album which her dad is producing.
Posted by Frances Lynn at 1:27 PM 2 comments: 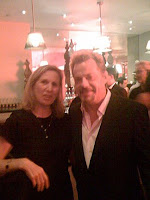 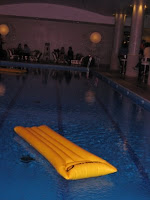 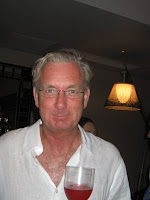 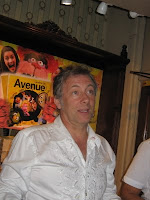 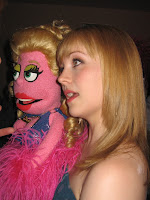 Alan Jones, Julian Clary's rollerblade consultant, and co-organiser of Fright Fest's international horror festival (at the Empire from August 27-August 31. Horror film fanatics can buy tickets on line from FrightFest's website) escorted me to Avenue Q, which has just transferred from the Noël Coward Theatre to the
Gielgud after a run of four years.

The musical, produced by Cameron Mackintosh might have won a Tony Award, but why don't West End theatres have air conditioning? It was the hottest evening of the year, and the Gielgud's auditorium was a furnace: it was a preview of hell.

After the show which involved puppets (!), the publicist Greg Day saw Alan and I were melting and invited us to a 'Pool Party' in the Haymarket Hotel's basement which has an enormous swimming pool. I knew I should have worn my swimming costume.

At the bar, I bumped into Michael Birt, the celebrity photographer who reminded me we worked together in the past (he once photographed Fran Lebowitz at Brown's hotel when I interviewed her for Ritz).

I wept on his shoulder, not when I spotted a member of Girls Aloud at the party, but when I realised the batteries in my (Canon PowerShot A550 camera) had gone flat. Michael advised me to ask the hotel's concierge for new batteries, but unfortunately, he didn't have any.

What was more unfortunate, Michael was off duty for the evening, so he didn't have a camera on him, only his iPhone. I asked him to take a (paparrazi) shot of Eddie Izzard and he dutifully obliged.

Four stiff Cranberry juices later, I left the party.
Posted by Frances Lynn at 1:31 AM No comments: