An Astrologer Who is Always Right 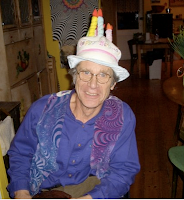 Gregory Sams who is the author of the fascinating bestseller Sun of gOd is such an ingenious macrobiotic cook, even his roasted pumpkin seeds are more addictive than chocolates. Over stuffing my guts at his birthday bash last night, I met an interesting astrologer called Laura Boomer, who is acknowledged in Greg's book for feeding him 'interesting solar links' . Laura must be authentic as she's been a practitioner for about thirty years, and at one point during her illustrious career was even the resident astrologer at the BBC.

'Astrology is a great but rarely used tool. To understand the planets is to know one's heavenly vibration. There are other ways to understand oneself in relation to the cosmos, of course: yoga, meditation, years of therapy, even the act of creation itself,' she says.

I don't usually plug friends so blatantly (!), but anyone who is interested in having their chart done (for the rest of their lives if they want) can e-mail her at planetmotion@yahoo.com Everyone who has been to her says she is always right.
Posted by Frances Lynn at 5:53 AM 1 comment:

It's not every day that one's friendly piano tuner has to take leave of absence in order to go on a world tour with Status Quo. But, that's what Paul Hirsh did when he was asked to stand in for one of the band (Andrew Bown) for a two year stint.

Paul, who is a talented all round musician: hypnotic keyboardist, guitarist, vocalist, bassist, composer, arranger and musical director was a founder member of the scintillating pop rock band Voyager. I suspect the reason why he gave me my (first) Christmas present: a Voyager album titled Eyecontact was an act of compensation for having to neglect my piano due to touring session work with acts like not only Status Quo, but also Chris Rea etc.

Incidentally, I don't play the piano but hang on to it for my Californian based brother-in-law Austin de Lone (a keyboard player) to pound on when he visits London.
Posted by Frances Lynn at 11:12 AM No comments: 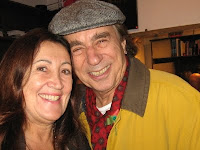 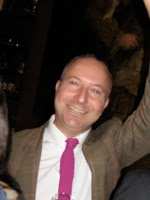 Although Thames & Hudson published the meticulously researched 70s Style and Design book, its co-authors: journalist Dominic Lutyens (his next book out is on the textile designer Celia Birtwell for Quadrille Publishing) and Kirsty Hislop threw an over-subscribed book launch for their new book with Fran Findlater at Portsea Place, her private Georgian house in London.

Incidentally, it used to belong to the late Kardo Sessoeffs who 'dedicated their lives to collecting and researching works of art.' Unfortunately for all the valuable works of art, there were so many guests pressed up against the paintings on the wall, that the Sessoeffs must be turning in their cultured graves.

The stylish coffee table book is stuffed with 70s 'movers and shakers' (including Peter Golding, Yves Saint Laurent, Vivienne Westwood, Zandra Rhodes, Bill Gibb, Halston and Fiorucci etc.) most of whom were at the crammed-packed launch. At one point, I was sandwiched between 70s luminaries Peter Golding and Lynne Franks in the middle of the stairs and none of us could move.
Posted by Frances Lynn at 1:54 PM No comments:

Sartorial historians and anyone who is ancient enough to have remembered Mods first hand, should drool over this Original Mods event held at the Horse & Groom, 26 Curtain Road, London, EC2 on Thursday November 12th, 8.30pm, entrance is free.

Whenever the word 'mods' is mentioned, the movie Quadrophenia immediately springs to mind, but mods weren't just a bunch of parka wearing scooter drivers who enjoyed seaside gladiator battles with rockers.

'The mods of public infamy came later, and were more associated with ska, soul, parkas, scooters and scrapping in Brighton,' says a spokesman for DJHistory, the event's organisers. 'The original Mods were the original working class rebels, post-war Britain's first dandies. The mods (derived from 'modernists') had their roots in the 1950s and arguably, grew out of the coffee bar beatnik scene driven by a significant Jewish cadre. We have organised a stellar cast of dandies to help us sift through the crap to get to the truth and hopefully get a few tips on how many buttons our suit should possess on the way.'

The prolific writer Paul Gorman, author of The Look will be the host on the panel. Also on the panel (in no particular oder) will be: the natty dresser Jeff Dexter, who was a pioneer South London Mod, and was banned from the Lyceum for doing the Twist before becoming London's celebrity DJ at Tiles, UFO, Middle Earth and Implosion. Lloyd Johnson, who is an aficionado about street fashion, (I was hooked on his Johnson shops in Kensington Market and Kings Road), and Mickey Modern, who reputed to be the first mod in south London and is 'still more stylish than the rest of Southwark put together.'

After the discussion, there will be questions from the audience and lastly, 'vigorous dancing' to 60's sounds.
Posted by Frances Lynn at 4:56 AM No comments: