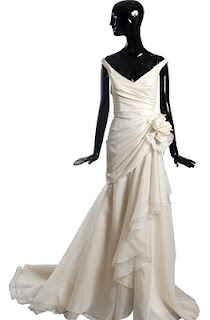 Miracles do happen! I just happened to be sauntering down Beauchamp Place in Knightsbridge first thing this morning when on impulse I decided to ogle Bruce Oldfield's new Wedding Shop at No 32.

The late Ossie Clark used to promise me he'd make my wedding costume, but Bruce's concoctions are ideal for a long trip down the aisle. If he had been doing wedding dresses at the time of Princess Diana's wedding (she was a loyal client), I'm sure she would have asked him to make her frock.

After I had finished drooling, I popped into Bruce's Couture Shop at No. 27, as I saw there was a sample sale on. 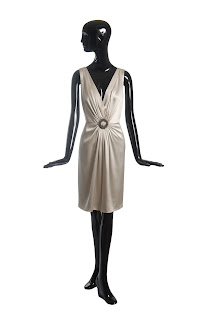 Luckily, all the clothes on sale weren't size zero: they were a humanely sized 8-12 and some of the clothes were even sized 14. And as the gorgeous clothes were ridiculously low priced, I greedily grabbed an exquisite dress (pictured left) out of the elegantly manicured hands of socialites shopping for bargains there.

But what was more amazing than being able to afford Bruce's beautiful couture was that he was in the shop, and to my surprise he told me he had actually read Frantic, my novel about the excessive early 70's in London and San Francisco. Bruce is very literary, so what was his verdict? 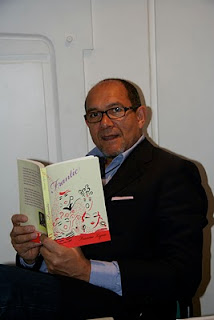 'I might say that it's not the sort of book I usually read but it's funny and pacey and is about a world that I wisely stayed on the periphery of, ' he tactfully said.

When I was a gossip columnist for the defunct Ritz Newspaper at the tail end of the twentieth century, I used to see Bruce a lot.

He often took me out for glamorous dinners at restaurants like San Lorenzo and Mr Chow, and in between haute couture mouthfuls of pasta or seaweed, he would generously tell me to borrow a costume from his Knightsbridge emporium for the evening if I was going somewhere ultra smart.

Now, thanks to Bruce's couture sale which is currently on at his 27 Beauchamp Place shop for three more weeks, I'm well stocked up for glittering soirees. Girls, don't all rush now!
Posted by Frances Lynn at 2:47 AM No comments: Links to this post 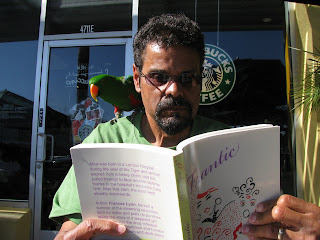 I'm amazed! Arlic Dromgoole (pictured above with parrot), one of my favourite rock 'n' roll artists in California has now got to be one of my new Fave Raves.

He has just alerted me he's read Frantic, my 'nostalgic' novel about the excessive early 70's set in London and San Francisco.

'This  is a great  read … it's an adult Alice and Wonderland story for those with open minds. With the book's backdrop of the music, art, drugs, liquor, and characters of the 70's, you know how to use words that capture the imagination,' this artist, photographer and rock 'n' roll film maker critiques. 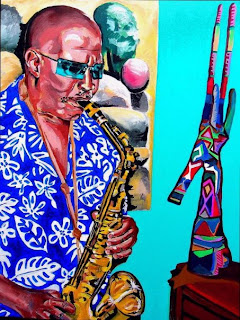 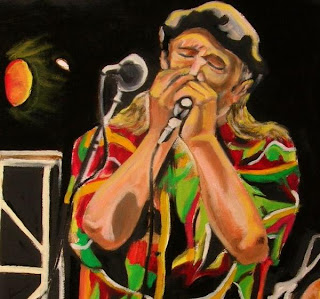 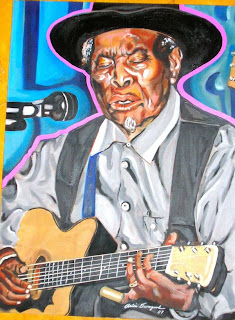 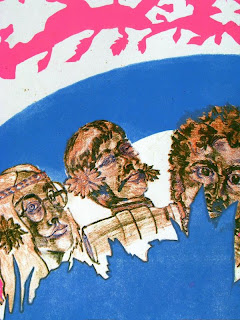 Arlic is also a much in demand portrait painter, who specialises in successfully capturing the images of his glittering medley of musician friends (including Steve Miller, the virtuoso guitarist Albert Lee, the late and lamented Norton Buffalo, John Handy, the sax player, and the sublime award-winning David Honeyboy Edwards). 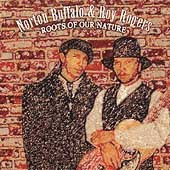 And if all that isn't prolific and versatile enough, Arlic finds time to design 'one of a kind' CD covers and enjoys taking photos of his favourite musicians, including the one for the cover of the Roy Rogers and Norton Buffalo's  Roots of Our Nature masterpiece (pictured above).

Arlic also recently re-kindled and managed the career of his friend, the sizzling blues musician Johnny "V" Vernazza, one of the most scintillating guitarists in the Music Business.

As I could easily listen to him for days, I confess I happily but guiltily procrastinate on a regular basis by looking at Arlic's  huge collection of exclusive video clips of Johnny "V", as well as all his other musician friends on his delectable and addictive YouTube and MySpace sites.

I'd be more than happy for Arlic to design any of my future book covers if I can discipline myself to stop viewing his clips  instead of focussing on writing.
Posted by Frances Lynn at 8:18 AM No comments: Links to this post

My Favourite Blog Bows Out

I'm devastated! Are my days of procrastination finally over? It looks like my favourite blog of all time: the cackle out loud witty Madame Arcati, which I'm compelled to devour on a daily basis is taking a long siesta.

'I'm leaving my followers for a while,' regally declares Madame Arcati.

The non-pornographic blog, which is authored by the genius astrologer Victor Olliver (pictured above),  who moonlights as the award-winning journalist, broadcaster and author (Farce Hole) was censored by Google yesterday, who mysteriously slapped an '18' certificate on the popular site. (Almost 200,000 hits this year to date).

Fortunately for Madame Arcati's international fans, the blog is not disappearing from the net forever, which is just as well as it's the only one I can be bothered to read.

'I shall pop up elsewhere from time to time, as will the person who imagines he is me. My thanks for your interest, your contributions, your praise and abuse. A New Moon in Gemini is a good time to move on,' Madame announces on her final post.

It looks like I shan't have to wear my funeral drag for the rest of eternity then.
Posted by Frances Lynn at 3:27 AM 2 comments: Links to this post 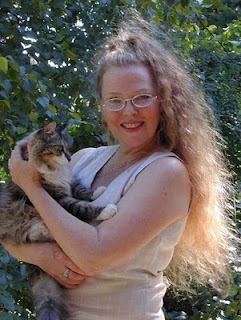 If it wasn't for the ace astrologer Laura Boomer coming to my rescue,  I suspect I would be spending the rest of my existence incarcerated in Broadmoor.

Ever since my new neighbours have moved in, I have been serenaded by the constant bang bang banging of their teen soon's football practice during his waking hours which has been prohibiting me from writing (any excuse!).

I was fantasising about pouring boiling oil over this boy with relish, but when I ranted and raved to  Laura about how  this his enthusiastic athleticism  was seriously getting me down, she offered to give me an 'invocation to Mercury' which Laura explained is the planet of communication.

'Dill (as a bach flower remedy).  Fennel (in salads and steam cooked).  A bunch of either Thyme or Lavender or Peppermint or Lemon Verbena or Marjoram near where you work (either dried or living). You might also want to mix two or three of these strong scents together, but only if they please you. You could also grow some of these herbs on a window sill nearest the neighbour who bugs you. And a A fern in your garden would also be good,' she said.

I was so desperate, I decided to follow Laura's advice  and tried out her invocation on Wednesday (according to Laura, it's the day of Mercurcy as well as being the planet of neighbours). Her invocation seems to be working already as I am not even fantasising this boy will break his leg, just praying his family will emigrate to Australia during his summer holidays. AAGHHHHHH!
Posted by Frances Lynn at 8:09 AM No comments: Links to this post

TLS Readers Eat Your Hearts Out! 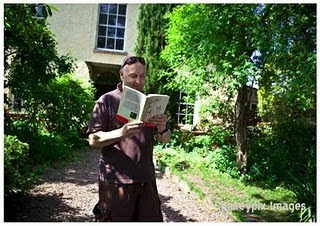 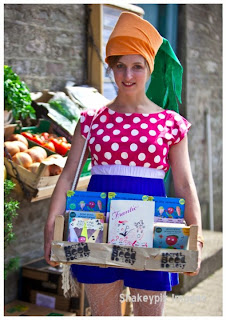 I was thrilled to see the photographer Richard Shakespeare (pictured top) taking pics of people reading Frantic at the Hay Festival of Literature and the Arts. Richard, who specialises in Music Industry pics certainly went beyond the line of duty when he spotted and snapped festival attendees reading my novel. 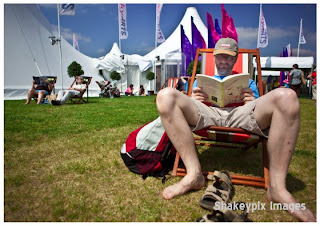 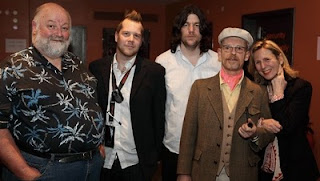 Richard is a truly talented photographer. He must be as he took such a divine paparazzi snap of me at  last year's Nick Drake's music event at the Cockpit Theatre (pictured above), I didn't even know he'd snapped me. 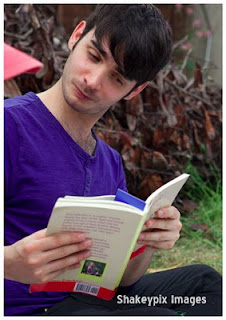 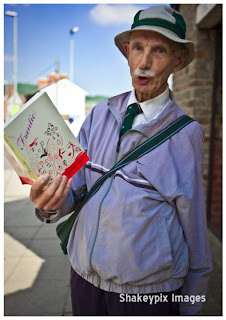 I was amazed his photo didn't make me look like a Diane Arbus monstrosity like some of the Fleet Street photographers' 'photos' when they ambush their victims (I'm not mentioning names here). In fact, I was so thrilled by the photo Richard took of me, I have begged him to take my portrait photo for my next book's cover. You know what 'they' say: 'He's worth it!"
Posted by Frances Lynn at 7:37 AM 1 comment: Links to this post