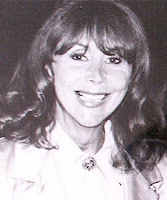 I wept buckets to learn that an old family friend, the prolific character actress Marianne Stone (in real life Mary Noble), who appeared in hundreds of movies including nine Carry On films died just before Christmas. She was the wife of the late showbiz writer Peter Noble whose last job was the editor of Screen International.

I loved Mary to bits! Before Peter got his job at Screen International, the Nobles entertained constantly at their Sunset Boulevard styled house in St Johns Wood. At every party, they roped their daughters Katina and Kara - the LA based ex-Capital Radio breakfast DJ, who now owns the property empire Noble Apartments, and their teenage friends (including me and my sisters) to serve the drinks and canapés to their show business friends.

'Give a peanut to Dudley Moore,' Mary used to say giving us a bowl of nuts, pushing us in his direction.

Going round to the Nobles' house was heaven, especially as each time there were friends like Paul McCartney, Shelley Winters (once I walked in on her when she was on the loo), and Peter O' Toole there.

And as my family lived round the corner from the Nobles, I daily used to run down the road to their house and have lengthy one to one sessions with Mary/Marianne discussing showbiz and men (one of her admirers was Donald Sutherland).

So, naturally I was devastated when Kara told me just before Christmas that Mary (87 years old) had peacefully popped off at home surrounded by her daughters Katina and Kara, plus her grandson, the video director Nick Frewe.

'I've had a fabulous life,' she said before she expired.

It was true, as she and Peter reigned as King and Queen at Cannes for years when the film festival was at its most glamorous, and were even the pampered guests of Imelda Marcos at the Philippine Film Festival in its hey day.

In typical showbiz Noble fashion, Kara has already organised an over subscribed memorial party for her late Mum in January and armed with waterproof mascara, I shall be there.
Posted by Frances Lynn at 1:09 AM 1 comment: Links to this post

Peter Eyre Has A Stalker

(I'm typing this with my toenails). I went to Zanita and Brian Smedley-Aston's for dinner at their spectacular stage set of an apartment in the West End last night. Brian (his uncle Frank Launder wrote, produced and directed the first four St. Trinian's films with his partner Sidney Gilliat) used to be an international film editor - one of his many credits was the legendary Performance - before becoming a movie producer. One of his films was the infamous Vampyres, the classic horror lesbian vampire film which incidentally is to hit Blu-ray Uncut on March 30th, 2010.

Over Zanita's delicious coq au vin dinner washed down with vintage champage, I was amazed to discover that the classical thespian Peter Eyre had recently moved into the Smedley-Astons' apartment block and now resides in the flat below them.

Although the last time I clapped eyes on Peter was several years ago when he 'was' Ken Tynan in Smoking With Lulu (unfortunately, I didn't see him in Jude Law's Hamlet), I drunkenly wrote him a deranged letter and impulsively shoved it through his letterbox. I don't care if Peter thinks he's now inherited a stalker, I'm a fan!

(In Peter Schleshinger's divine book Checkered Past, full page photos of Peter Eyre and myself appear on pages next to each other! Aaaaaaah!).
Posted by Frances Lynn at 6:44 AM No comments: Links to this post

I'm currently reduced to blogging with my fingernails, as I'm suffering from a flare up of RSI in my thumbs due to excessive key tapping. In order to avoid having to pick things up with my teeth, and resorting to use voice recognition software, I'm going to hang up my hands for a bit until they recuperate. At least I've got a good excuse not to send out Christmas cards this year, as at the moment I'm unable to forge my signature without difficulty.

But all is not bleak, as I have managed to book myself in for a concentrated course of Alexander Technique sessions (a long waiting list) with my local practitioner (Paul Burge) who sleeps, dreams and breathes it. He said if I brought my laptop in to see him, he would instruct me exactly how to work with it, which could be the eternal RSI cure I've been searching for.

And yes, I booked myself in before discovering that the bunion afflicted Victoria Beckham is a new convert, which could prove that the Alexander Principle, founded by F. Matthias Alexander (pictured) is going to be the next 'must have' fashion accessory.
Posted by Frances Lynn at 9:34 AM 1 comment: Links to this post 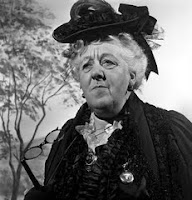 I'm hopelessly hooked on Madame Arcati's laugh out loud, hysterically funny gossipy blog, which I compulsively devour on a daily basis. And the witty and bitchy Comments are worth reading too, as they are provided by international journalists, writers, publishers and movie stars etc., most of whom post anonymously.

Because Madame Arcati (in real life, Arcati is the journalist and writer Victor Olliver) is my favourite blog of all time, I was THRILLED when 'she' put my first novel Frantic on her Christmas book shopping list. I was even more thrilled to see what exalted literary company I'm keeping on her sidebar: a convicted criminal authoress and Jonathan King, who's written his autobiography. Poor bugger!

Thanks to Madame Arcati, I see several new copies of Frantic have now been sold, which proves that on line publicity really does work.
Posted by Frances Lynn at 1:00 AM 1 comment: Links to this post 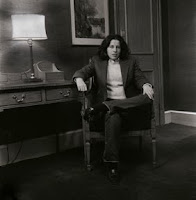 In 1979, I interviewed Fran Lebowitz for Ritz newspaper over tea at Browns Hotel. The celebrity photographer Michael Birt took this nostalgic still of her which he has just discovered in his archives. Michael, who's currently got a photograph of the playwright Polly Stenham in the Taylor Wessing Photographic Prize at the National Portrait Gallery had to sneak the picture as the hotel didn't allow professional photographers to shoot in their foyer. Also, I couldn't hear everything what Fran was saying as she softly garbled her words but we managed!
Posted by Frances Lynn at 9:04 AM No comments: Links to this post