Anyone who lives in the Marin area might like to dig out their vintage trainers and start training by powerwalking around the block and beyond.

The Richard de Lone Special Housing Project is having its 3rd annual run in the 2011 Marin Human Race on May 7th.

This year, the event's runners feature Whitman Donaldson, who is the son of RDSHP's board members Michelle and Kevin, and who has Prader-Willi Syndrome.

Lesley de Lone, who is Richard de Lone's mother will be rockin' for her son, likewise her daughter Caroline, Richie's sister. They are currently running their guts out, preparing for the Great Race. They are so fit, they could easily qualify for the Olympics!

Several of Richard's teachers from Cypress School will also be running on the day, alongside a team of neighbourhood kids - Will Coomber, Lucas Alper and Olivia Gerraty, and a team of runners from Southern Marin Fire Department, led by Johnnie Alper. 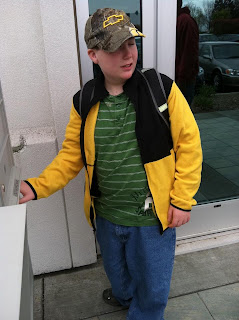 Posted by Frances Lynn at 12:33 AM No comments: Links to this post