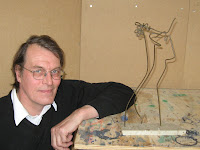 David Graves, who has been David Hockney's assistant for decades now writes extraordinary period plays in verse in his spare time.

In the late Seventies, Graves gave me a couple of his iconoclastic sculptures, one of which looks like a peculiar TV ariel. That one was on top of my TV for over thirty years until it fell onto the carpet last week. Its marble base broke in two, but luckily David Graves came to the rescue and superglued the base together for me today, and now it's as good as new.

David also printed out a couple of his plays for me, one of which is inspired by Giambattista della Porta, the most prominent playwright of the late 16th century Italy. It's currently out being read, but I'm so jealous he doesn't suffer from writer's block. David, who is fairly new to creative writing said he doesn't know where his plays come from but the verses are spilling out of his brain. He feels compelled to write. I wouldn't be surprised if he is being channelled by Giambattista della Porta himself!
Posted by Frances Lynn at 12:03 PM 1 comment:

Day of the Dead meets Mencap 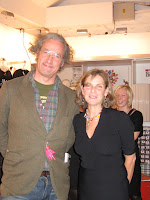 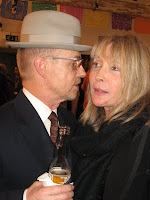 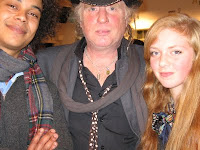 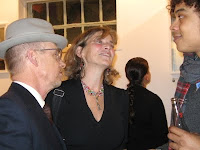 I schlepped along to the "Mencap Dia de los Muertos" preview at the Proud Gallery in order to support Joanna Jacobs, who's got a Mixed media 'artwork' in the show. Joanna, daughter of the veteran disk jockey David Jacobs, and the ex of ('Ain't Misbehavin') Clarke Peters used to be a fashion model for Models One (The agency's founder, Jose Fonseca has got taste) before turning to Art and creating her 'eco-funky' recycled bottle cap earrings (for sale at the Proud Gallery at only £20 a pair!).

Other artists displaying their wares included Gillian Ayres, James Aldridge, Craigie Aitchison, Hilary Simon and the ubiquitous Tracey Emin. I wondered why none of the art, inspired by the Mexican festival Day of the Dead didn't display red stickers until I discovered that all the stuff will be auctioned at Bonhhams, Knightsbridge on 11 November in aid of Mencap.

So, who was at this glittering exhibition besides Joanna's actor son Jo and a sea of her old boyfriends and admirers? The artist and photographer Mark le Bon, Gavin Millar, Jenny Dearden, Jeff Dexter and singer/songwriter Andy Allen were amongst the rabble admiring the art. Andy, who is the son of Elkan Allen, creator of 'Ready Steady Go' replaced the Sex Pistols' Syd Vicious on bass when he popped his clogs. He was with his pretty daughter Dixie, who's doing English Lit for 'A' levels, but moonlights as a performer for her dad's Hankdogs acoustic band. Andy stuck a skull sticker on me which was a guest pass for his Easycome Acoustic Club in South London. It was worth dragging myself out for that then!
Posted by Frances Lynn at 3:52 AM 2 comments:

Girls! Offer to escort your sugar daddies when they go shopping at New and Lingwood, the 'world-renowned' menswear company. They make the school outfits for Eton's pupils, so that's why their international clientele includes Old Etonians besides royalty, Hollywood movie stars and the British aristocracy.

Not many people know that although New & Lingwood is a predominately mens' store (who makes bespoke clothes as well as ready-made shirts, zany hosier and shoes), they also have a sideline making bespoke coats for women. Justin Sumrie, the Director of N & L , (and also my cousin) says that when their regular men customers are being measured for bespoke clothes, the store also offers to make their women companions bespoke coats while they are waiting. Beats just being offered a cup of coffee.

This was all news to me until Justin offered to give me an early Christmas present: a couple of elegant coats when I dropped in to see him at the store's Jermyn Street branch today. He gave me a replica of a bespoke soft tweed coat made for the Queen of Belgium (one of N & L's clients) and also a black doeskin coat. As starting prices range from £595-£1,000 upwards, I was thrilled, especially as I now don't have to persuaded a man at gun point to take me along to New and Lingwood while he gets measured up for a bespoke wardrobe.
Posted by Frances Lynn at 5:52 AM No comments: 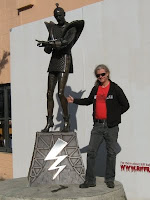 Film director David Blyth has just returned from the Hamilton Underground Film Festival (in New Zealand) where he attended a packed-out screening of his last film Transfigured Nights.

David met Richard O'Brien's alter ego, Riff Raff from The Rocky Horror Show on Hamilton's main drag - Victoria Street. The last time I saw Richard was when he was incognito, dressed as a woman at a party. He was so convincing, I didn't recognise him. He was so immersed in his female character that I suspect he believed he was the real thing. I never realised he was a method actor! (Incidentally, David was interviewed recently on - click on - Extensive Podcast on his BlythCult Twitter page).
Posted by Frances Lynn at 5:38 AM 1 comment:

Beauty and the Beast 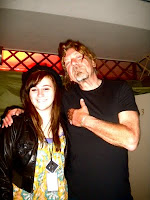 Robert Plant, the singer of the late and lamented Led Zeppelin was one of the surprise guests at the recent Richard de Lone Special Housing Benefit concert at San Francisco's Great American Musical Hall. Austin de Lone's singer/musician daughter Caroline (my niece) was also one of the guest performers at the concert (she sang one of her own songs). And here she is backstage with Robert Plant (click on the photo for close-up). I'm glad he recognises talent when he sees it.
Posted by Frances Lynn at 11:33 PM 1 comment:

A Space For Photo Exhibitions

If a photographer is unable to land a show at the prestigious Hamiltons Gallery, all is not lost. There other venues for photographers to exhibit their wares. Peter Herbert, who will have an exhibition called "Skylines" at the Conference Centre, St Pancras Hospital from November 19, has chosen a gallery called Flaxton Ptooch in 'up and coming' Kentish Town Road to showcase his new stuff, a salon large enough for a rock band to play in. Just as well, as Peter's pop singer daughter Kiria was strutting her stuff at the packed out opening in her black and white costume, which matched the photos' frames. Peter, I want a set tea at the Wallace Collection in exchange for the blatant plug!
Posted by Frances Lynn at 4:05 AM No comments: 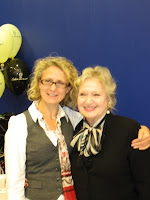 I popped into Boots today (the branch opposite Debenhams in Oxford Street), and witnessed one of their in-store's promotions. The versatile designer Cellia Birtwell, flanked by her daughter-in-law Bella Clark (who runs Celia's fabrics shop in Westbourne Park Road) was raised on a podium on the ground floor presiding over her new collection of gorgeous knickknacks.

I know now where to get all my Christmas shopping from, as Boots is doing a Special Offer (3 for the price of 2) until December 25th. Loads of enthusiastic punters were in a frenzy, including David Hockney who was buying up Celia's pink patterned Sewing Organisers before he returned to Bridlington. As I can't even thread a needle, I settled for Celia's piece de resistance: her black patent Vanity Case with her trademark bouquet design, a couple of matching pairs of her pretty bouquet patternd socks and a Gadget Case. And as it looked like it might rain, I also grabbed one of her umbrellas. All the stuff is very well-made and is selling at bargain Boots prices.
Posted by Frances Lynn at 2:53 PM No comments: