It's All In A Good Cause 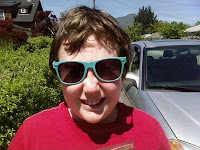 The Richard de Lone Special Housing Project have also been selected by the Mill Valley branch of the Tamalpais Bank as the charity that they are sponsoring this year for the Race.

The Richard de Lone Special Housing Project, which accepts donations all year long at its own website will soon be announcing the details for this year's exciting RDSHP Benefit Concert at the Great American Music Hall. Past benefit concerts have consisted of Elvis Costello and Ry Cooder, Jim Keltner and Nick Lowe. Can't wait, especially as the concert is for such a good cause. Richard de Lone Rocks!
Posted by Frances Lynn at 11:17 PM No comments:

I was on the verge of booking myself onto Eurostar, to spend a weekend in Paris, on the bank holiday weekend (May 2nd) when I received an extraordinary invitation for Andrew Logan's Alternative Miss World contest.

Brian Eno once remarked,‘The Alternative Miss World should be entered for the Turner Prize!’

This extraordinary beauty contest that brought Leigh Bowery to London, that intrigued artists like the late Francis Bacon and David Hockney has attracted 'fashionistas' from Zandra Rhodes to Ryan Style will be entering its 12th outing since 1972 at London's Roundhouse, (where I saw every rock band perform decades ago!) on Saturday May 2nd.

Andrew Logan's Alternative Miss World promises to be a Crufts-inspired competition, which will thrust twenty hard-core exhibitionists, including head-hunter Janet Slee, Gallery owner Matthew Flowers, club 'phenomenon' Daniel Lismore & milliner Piers Atkinson, onto the stage to compete through Daywear, Swimwear and Eveningwear for the ultimate accolade; the coveted title of boom boom: The Alternative Miss World. Judged on poise, personality and originality by a panel of the 'ruthless crème de la crème of the creative world', contestants pull every trick in the book to gain attention, favour and those all-important votes. Past competitors have included actress Jenny Runacre, The Royal Academy's Norman Rosenthal, Sarah Lucas, 80 year-old Russian Pani Bronua and ‘Transformer’ Burnel Penhaul.

Andrew will hosts/hostesses the evening with 'quickfire-wit' Ruby Wax and the mastger of the double entendre, Julian Clary.

I hope I don't blow out my eardrums (again) as there will be Live music from The Irrepressibles, the siren sounds of Bishi and Moscow’s Aquaaerobika on the agenda. If all that isn't enough, there will also be video art, semi naked boys, dancing girls, drink, friends & family, performance, glitter, dazzle and spectacle.

Rumour has it that stars including Elton John and Grace Jones will be attending. Paris will have to wait for a few days.

The event's details are:

The Alternative Miss World
The theme is The Elements
The place is The Roundhouse
The date is 2nd May
The time is 8.00 pm
The night to crown it all!

From the Roundhouse Box Office

www.Roundhouse.org.uk
Posted by Frances Lynn at 8:10 AM No comments: