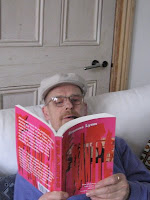 I've just had the most thrilling afternoon giving a reading of my novel Frantic to an audience of ........... one! I went round to the legendary Jeff Dexter's house and read my book out aloud to him. Thankfully, he laughed all the way through, especially when it came to the passages 'inspired' by him: in the book, there is a 'faction' disc jockey character at the Middle Earth club in Covent Garden during the late Sixties. In real life, Jeff used to be - boom di boom - the underground club's resident D.J. and master of ceremonies before moving to the Roundhouse where he hosted his spectacular 'Implosion' events. Jeff, who had already read the book in the lavatory, gave me the biggest compliment of my life by saying he would read it again! I've got a fan!
Posted by Frances Lynn at 12:53 PM