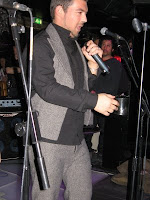 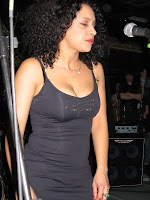 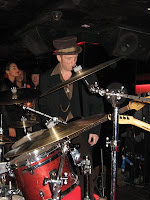 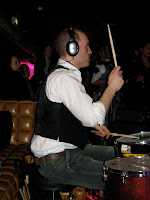 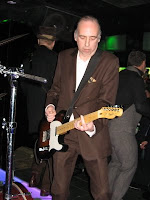 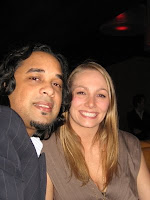 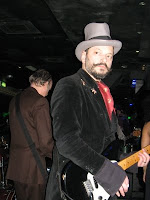 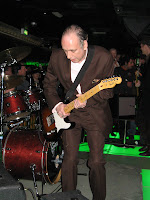 I almost blew my eardrums out tonight at the most sensational gig I've been to in ages. The Rotten Hill Gang's gig at the packed-out, purple hazed Movida club club underneath the London Palladium was a riot. If they don't get signed to a major label after their exhilerating performance tonight, there is no justice in this world.

Jeweller Stephen Webster, one of the band's co-managers grabbed the microphone and made a passionate speech about managing this exciting band. Unfortunately, as I was standing at the side of the stage next to the speakers, I couldn't hear his dialogue, but he was incredibly enthusiastic, just like his glamorous looking band.

Mick Jones, who guested was riveting to watch. The rest of the band (Gary Stonadge: bass, Arran Ness: drums, André Shapps: guitar, Alexia Collen: vocals, Krysten Cummings: vocals, Redskin: rap) was incredibly tight and everyone leapt up to dance seconds into their first number. I'm delighted I saw them play in such an intimate club.

The Rotten Hill Gang's future gigs include one at the Inn On the Green, Ladbroke Grove on Friday 13th at about 9ish, and one on February 18th at the fabulous sounding Cuckoo club in West End's Swallow Street. Can't wait!
Posted by Frances Lynn at 3:45 PM

They are playing @ a Alien Jazz Pary Presents night at the 100 Club
March 25 2009
http://alienjazzparty.com

Dear Frances thank you for your support and when your ears are healed i hope you can make it to a Alien Jazz Party Night, We are having a Tom Waits Tribute night in April i feel you might really like that gig,
i am going to leave you the link to the photos of Rotten Hill Gang's Oct AJP Gig http://www.alienjazzparty.com/photo_galleries/hundredclub_oct08/hundredclub_oct08.html
really hope your ears mend all the best, big thanks
Daryl.
100 Club no advanced tickets £10 on the door, doors 7.30pm