A popular music festival is cancelled 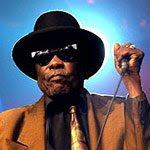 Sob! Not only is the legendary Sweetwater club in Mill Valley (temporarily) closed due to a funding delay, but now The 2009 San Francisco Blues Festival has been cancelled due to lack of money.

It will be a crying shame if the longest-running blues festival in the United States, which has been held in the bay area for the past 36 years doesn't get resurrected. Over the decades, It has been host to blues music legends like B.B. King, Etta James, Taj Mahal, Junior Wells, and John Lee Hooker, as well as rocksters like Johnny Winter, Los Lobos, Austin de Lone, Steve Miller, Taj Mahal and Little Richard, to name just a glittering few.

Music loving protesters in the SF Bay area are already clamouring for the festival to be reinstated, so if solvent IT workers buy T shirts from the San Francisco Blues Festival site, maybe enough cash will be raised to fund the festival for an encore next year?
Posted by Frances Lynn at 3:25 PM