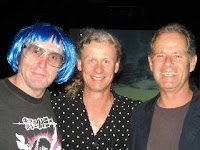 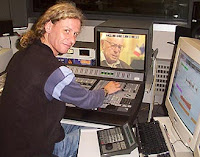 Jed Town, one of New Zealand's leading audio-visual artists has 'flitted between punk, video-art, ambient electronic and film scores" throughout his fascinating and versatile career. He has provided the score for David Blyth's ahead of its time Transfigured Nights, and also other iconoclastic scores for several of David Blyth's extraordinary films in the past: the documentaries, Fish Tank Telly and Our Oldest Soldier. And parts of Jed's 'original, haunting and evocative' album, Music for Dungeons, features as the soundtrack of David's Bound for Pleasure controversial documentary.

Transfigured Nights had its MANGA MAD New Zealand premier on Thursday February 26th at the Moving Image Centre, Galatos off K Road, Auckland at 7.30 p.m. The evening, which 'evocitically explored Exotic Sex Fantasy Media' was a sell-out. It was definitely worth attending for David 's futuristic visuals and Jed Town's sensational sounds.