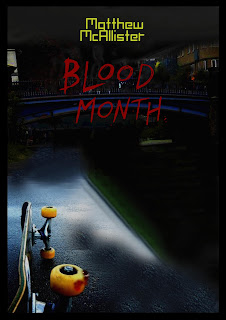 If Patricia Highsmith, the psychological crime thriller writer was able to read the newly published crime novel Blood Month in the solitude of her grave, I am certain she would award Matthew McAllister, the book's fictitious author a Medal. For the novel's central character 'DV' makes Highsmith’s psychotic creation 'Tom Ripley' pale in comparison.

"DV is one of the most terrifying young men since Tom Ripley," says Karen Duffy, Publicity Director of Atlantic Books – one of the many glowing quotes from the rave reviews on Blood Month's publishers' Atrium Editions umbrella website.

In fact, if Highsmith were able to award Blood Month’s author a medal, she would have to donate three medals.

This thrilling crime novel, which incidentally I was unable to put down after I started devouring it on my Kindle, was co-written by two authors: the playwright/novelist Simon Burt, and the acclaimed writer, journalist and book critic: Iain Finlayson.

For buffs: Iain, who scribes non-fiction book reviews for Saturday’s The Times, as well as being the book editor on Saga magazine, is also the author of numerous highbrow biographies including Browning, Boswell, and other literary non-fiction titles, including the sublime Tangier: City of the Dream.

(Atrium will, over a period, publish Iain and Simon's back list, including some of Simon's unpublished stuff, plus some screenplays they've written together. And,  if other good writers want to come under the Atrium umbrella, they will be able to do so).

So why are the illustrious writers Iain Finlayson and Simon Burt bypassing Traditional Publishing for their crime novel trilogy and releasing their titles as e-books?

The Atrium Editions Publishing site boasts glowing reviews from a conglomerate of major publishers who have already read Blood Month.  Could this indicate a future traditional publishing book deal for Blood Month and its sequels?

All I can say is Blood Month is the most compelling crime novel I have read in as long as I can remember, and I drool to read the rest of the trilogy. Patricia Highsmith, eat your heart out!

(Read this fascinating interview about Iain Finlayson on Madame Arcati).

Blood Month: a new Kindle release (currently priced at £1.92), is also on the Kindle app for iPad.
Posted by Frances Lynn at 6:05 AM