If you don't buy Celia Birtwell's book (published in the UK on October 3rd and on October 11th in the USA) you will miss out, especially if you are obsessed by Beauty, Fashion, Style and Art.

Celia's scrumptiously designed book (text is supplied by style journalist Dominic Lutyens) is a picturesque historical 'scrapbook' of her 'extraordinay' life featuring her designs and rare pictures of her ex-husband Ossie Clark and many friends including David Hockney, who has drawn and painted her over the years.

'Celia is one of the most talented textile designers ever. She's brilliant .....' decrees cobbler Manolo Blahnik. Even fashion honcho Karl Lagerfeld has said Celia Birtwell is the best textile designer in the business. 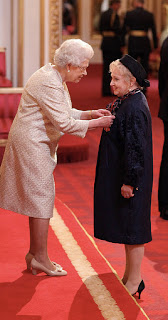 On Friday night, Celia Birtwell who was gonged a CBE for 'services to fashion' in 2011 was interviewed by curator Sonnet Stanfill in the Victoria and Albert museum's packed out Manfred Gorvy Lecture Theatre.

I was just in the middle of 'dishing' thespian Rupert Everett when to my horror I suddenly realised the cameraman perched next to me (filming the event for future streaming on Vogue) was recording the sound.

(Rupert Everett's 'Pygmalion' contract stipulated he was permitted to leave the production three weeks before the end of the show's run forcing its director Philip Prowse to audition a replacement).


After the interesting talk, there were so many slobbering fashion enthusiasts lining up to buy Celia's book, she almost did her wrist in patiently signing everybody's copies. Quadrille, the book's publishers must have been ecstatic.

Let's hope Celia has recovered in time to attend her stand (no K336) at Decorex held in the Royal Hospital Chelsea from September 25th until September 28th where her unique fabrics will be displayed.
Posted by Frances Lynn at 8:12 AM