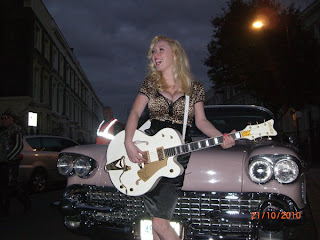 I was thrilled to witness Kiria, the sensational looking 'pink punk' singer buying a copy of my novel Frantic in Celia Birtwell's shop when I went in there yesterday to sign some copies.

It must have been a case of delayed synchronisation, as I had been to her Radio album launch at 'My Beautiful Launderette' on Talbot Road in Notting Hill Gate last week. 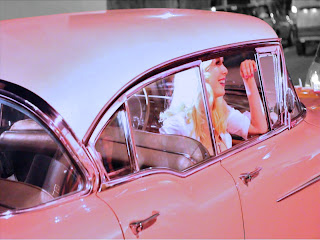 This had been no ordinary music launch. The event was a glamour-puss stuffed klieg lit premier. And what made the event megawatt extra special was the spectacle of Kiria arrived in a convoy of twelve Harley Davidsons and a pink cadillac.

If all of this wasn't spectacular enough, pin up showgirls served pink champagne and cocktails in the pink back lit launderette, which was full of bubbles and ..... projections of Kiria's forthcoming video releases on the wall!

Kiria's current single is titled Jelly Baby which is guaranteed to stick in one's brain for an eternity.

I predict her next single Alright arriving in November, will also be equally as addictive. But, it looks like I might get hooked on Kiria's startling music (which she writes as well as playing her guitar). Her next single after that will be the waltz, titled Love Song. Aaaaaah! 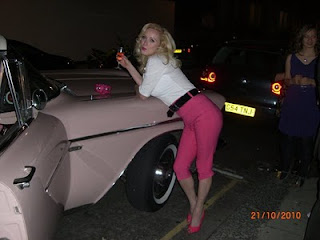 It must have been kismet I bumped into Kiria inside Celia's emporium, because she also put me on red alert about her next gig: it will be this Friday, October 29th at the Cobden Club, London's 'favourite' membership club.

If Kiria's gig is anything as exciting as her Sex On Stage video clip,  I guarantee the entire audience will be throwing jelly babies at her and her band.

After I signed Kiria's copy of Frantic, I dragged her onto the 31 bus. She usually takes taxis everywhere, so the bus ride was an adventure for her. Especially, as an old lady next to us crooned 'would you like another Jelly baby?'

I went home and promptly downloaded the single AND the Radio album from - click here: iTunes.
Posted by Frances Lynn at 2:20 AM

Wonderful Frances, your'e a star! Hope the writing is going well, nad thanks for the good luck re the gig....it was lots of fun.... XXXX