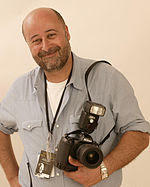 Celebrity Exposed: the Photography of Richard Young is a very entertaining documentary about Richard Young, the celebrity photographer.

Produced by John Osborne and fabulously directed by Grammy Award winner Don Letts (both men are directors of Brassneck TV production company), the first part of the four part documentary goes out on Sky Arts 1 HD at 8pm on 8th May.

I especially loved the documentary (I saw a preview at the Soho Hotel last week) as Richard and I used to work together on Ritz Newspaper during the late Seventies and early Eighties covering London's crazy social scene.

When I started out as a journalist, working as a gossip columnist for Ritz I used to take pictures of my victims with my little instamatic (this was before the age of digital), but the published pics all came out blurred.

I found it a bit of an encumbrance trying to delve into the human psyche and snap at the same time. And as I was pretending not to be a journalist but a genuine friend of the people whose brains I was surreptitiously picking, it looked a bit suspicious - me continuously flashing my camera in their gobs. An unobtrusive David Bailey I was not!

One evening, I wasn't minding my own business in the middle of a nightclub opening (Wedgies in the Kings Road) when an exuberant man with long black hair and dressed in black leather banged me on the shoulder. 'Hi, I'm Richard Young, your new photographer,' he said cheerily.

He went on to explain that Ritz Newspaper had just hired him to be my personal photographer, which suited me fine.

'Photograph that lump of lard over there,' I ordered at full volume, pointing him in the direction of an obese lord.

Richard did as he was told without asking any questions. Richard Young was no virgin when it came to the world of 'photo journalism' however. He had recently managed to successfully infiltrate Liz and Richard Burton's birthday bash at the Dorchester, taking a paparazzo shot of them, so he knew exactly what he was doing. He manipulated his camera like it was a machine gun, relentlessly sniping fire. Rat-a-tat-snap!

At the beginning of our partnership, Richard didn't know who anyone was, but he quickly learned Who Was Who, i.e. which person was worth photographing.

Once, when I was at a dinner in Karl Lagerfeld's honour at Mr Chow, I was seated at the fashion designer's table with a group of women journalists, who spent their whole evening, wearily having to tell their photographers whom not to photograph.

I didn't have to exert myself one little bit and concentrated on my fried seaweed, as Richard already knew 'everyone', and automatically knew whom to snap without my having to tell him.

'You are fortunate having a photographer whom you don't have to tell what to do,' the fashion editor of Women's Wear Daily confided in me.

'Can I borrow him?' the dame from The Daily Mail asked.

It was all very well that Richard was independent, but he became too independent, for soon Richard was no longer taking exclusives for 'Ritz', and like all good celebrity photographers was making a fortune globally syndicating his photographs of the rich and famous at the functions I took him too.

Richard and I worked together harmoniously for years, but I knew we had to finally part company when people at parties started to rush up to speak to him rather than speak to me first. He was no longer my personal photographer, but after having worked with me, was the only civilised paparazzo in London who was allowed to take photographs inside, rather than hang outside for celebrities in the cold.
Posted by Frances Lynn at 1:34 AM