A New Art Show In Bondi Beach Deserves A Plug 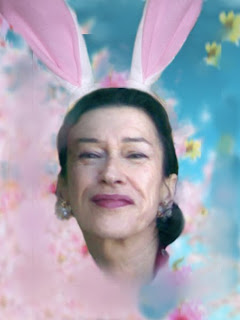 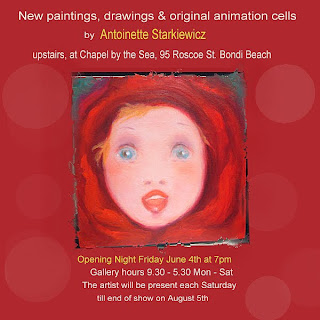 I wish I could zoom to Australia, as I've just received an invite from Antoinette Starkiewcz for a preview of her new Art show next Friday.

Antoinette is an innovative animator and portrat painter who recently supplied her unique illustrations for Jeff Schubert's The Little Pink Ant.

Antoinette was one of the influx of 'zany' Australian girls who invaded London during the late Seventies, and I often witnessed her decorating fashionable nightclubs in the company of glamorous escorts like ex-beefcake Arnold Schwarznegger etc.

Antoinette's frenetic party days are behind her now, as she has been incarcerated in self-enforced solitude for the past few months, slaving away for her new exhibition next week (on Friday June 4 at upstairs, the Chapel By the Sea at 95 Roscoe St, Bondi Beach).

'I've done nineteen new paintings: all are oil on canvas. Of these, four are large, (mostly landscape). Nine are medium (mostly heads) and six are almost miniatures: 13X18cm - 'The Barbie Series'. Five new large drawings (all portraits), The four original cells are not new - they're from my pre-digital era films; animation cells are now a rarity,' Antoinette told me in-between brush strokes.

I do fantasise I could hire a magic carpet to travel there.
Posted by Frances Lynn at 1:23 AM

Did she do the cover for your marvelous new book Frantic?

Unfortunately no. (Celia Birtwell did the new cover).