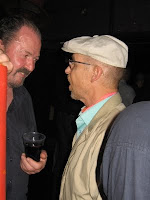 I haven't been to Dingwalls, the live music club in Camden Town for centuries. I think one of the last times I was on the guest list there, was when I listened to Debbie Harry's gig in the ladies' lavatory which used do have the best acoustics in town!

Last night, I was booked in to see Martin Belmont perform at the club, playing his new CD The Guest List featuring fabulous musicians like Paul Carrack, the 'rock 'n' roll doctor' Hank Wangford (who gave a sophisticated performance), Nick Lowe, and Graham Parker etc. The legendary Dave Robinson, who created Stiff Records was holding court, surrounded by blokish pub rockers (such as the surviving Ducks de Luxe) most of whose careers he has spawned. 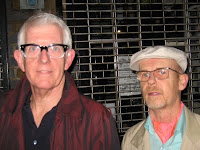 So, how did I get to hear about this illustrious gig? From Austin de Lone (my illustrious brother-in-law), who started the pub rock movement in the United Kingdom with his old band, Eggs Over Easy. He has inspired and played with them all!
Posted by Frances Lynn at 1:03 AM